The world of online video games can be very cruel, especially when it comes to massive titles used by millions of players; often titles on everyone's lips, like Minecraft, end up capturing the attention of the entire press and of all the players who follow a given field, neglecting very juicy news, like the one we give you today: Roblox, a real network of games online multiplayer designed for boys between eight and thirteen, has exceeded one hundred million monthly users, beating, in fact, the giant of Mojang and jumping to the headlines.

Defined by its creators as a "creation platform", Roblox offers its players the possibility of creating real worlds that can be played in multiplayer through an editor through the Lua Script programming language where you can set your own stories.

It starts from a level with predefined features with an editor (very sophisticated) through which the player can make the changes he wants and build his own scenario.

Once the creation phase is over, and after obtaining their own "world", the user can then invite other players in online gaming sessions and then live their adventures. In practice, a sort of game that allows you to create and play your own games, even in a sophisticated way (developers can also theoretically sell some of their creations using microtransactions).

Stop, never heard of Roblox so far, right? Quiet, all normal; the little one from Roblox Games is unknown to most, despite being very old: believe it or not, Roblox has existed since 2005, it has come to be developed on on iOS in 2012 and in 201 saw the launch of a support for Oculus Rift.

A sort of silent game-phenomenon, evidently able to excite millions of players all over the world, with interesting objects (which we will discuss shortly) and now come to an enviable goal, perhaps the fruit of its offering a fairly interesting game philosophy .
A virtual coding dojo? 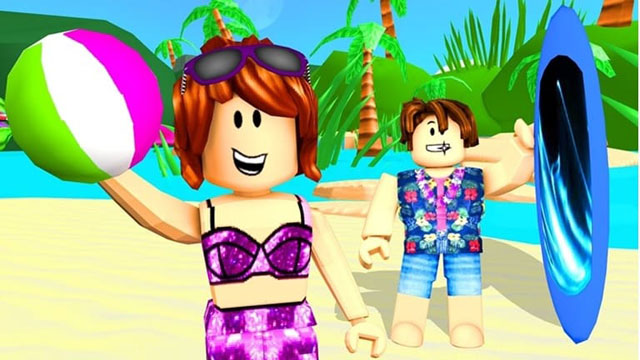 Beyond these aspects, however, and the fact that not everyone can appreciate the genre or the destination of Roblox, are some elements of his philosophy and allow a glimpse of some element of interest.

The writer, to introduce the story and try to contextualize the news, has preferred to start from Minecraft for some features in common with the game we are dealing with, such as the importance of personalization and the role of creativity; however, a closer analysis seems to want Roblox to push the genre towards much more ambitious goals. Beyond the fact that Roblox risks being one of those games that find their place in the channels of youtubers with the aim of making large numbers in the 8-14 age group, in fact, the fact that the player is given the opportunity to use a programming code to have fun makes Roblox something to keep under control, and the impression is confirmed if we go deeper.

If we browse the website of the company and the game, it is clear that the company's goal is to make its keyword the imagination, along with some others: creativity, fun, community of developers and, last but not least , even teaching. The impression from outside is that the message that the company wants to make pass is that its creature is a sort of creative laboratory in which a new generation of programmers can train their creativity in a protected way (in this regard, the site also presents guidelines for parents) and stimulating. In short, it seems that Roblox wants to do what Lego did in analog, or give the tools to creatives that could develop their own talent. A fascinating idea.

Now, let's be clear: no one believes that the vast majority of Roblox players play because they are genuine budding fathers eager to train their skills and become a programmer, but the good news about the high number of users and the mission stated by the programmers on their own site would suggest a possible convergence of virtuous interests and objectives.

Beyond the fact that Roblox can become an interesting experiment in coding training, the most classic example of a gym for minds, a fact should surprise us: that most users do not know this reality.

We Robuxbuy.com is one of the best site for you to relief from tedious grinds in Roblox. We offer Cheap Roblox Robux for gamers with 100% Safety Guarantee for all platforms. Buy Safe Roblox Robux for Sale for your Jailbreak and other hot games.